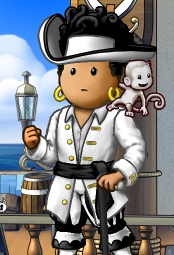 Metaphysics launched his Puzzle Pirates career on the Sage Ocean in November 2005 (But has until recently been playing under different pirate names - see below.) Metaphysics also plays under the pirate Hugsnotdrugs.

Little is known about Meta's history as he has since forgotten. As his former pirate he was previously SO and First Mate of Rated Arrr and Fleet Officer of Silent Fools.