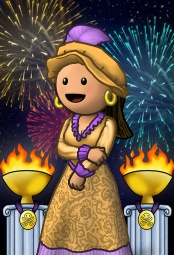 Saeliyagil lives on Tigerleaf Mountain on the Cerulean Ocean. She is a fleet officer and damsel of the Where Eagles Dare crew and she is a captain in the Tigerleaf Mountain Navy in the Onyx Archipelago. Her name is inspired by a famous story about a mighty ring.

After a long journey on seas and oceans Saeliyagil washed ashore on Tigerleaf Mountain on August 10th, 2014 on the Cerulean Ocean. She's become friends with Scrapper-West and Ilse-West

After being given a humble shack, she decided to learn more about the Pirate life she had been introduced to and learn piracy skills in the navy.

On September 3, 2014, she was invited to join the crew Where Eagles Dare by Cpntook.

So far Saeliyagil likes learning the piracy skills the best. She also has an interest in shops and is considering if she'll open up a shop in the future. Of one thing she is already certain; she will start her own crew one day.

In addition she's addicted to the Kraken.

Like most people Saeliyagil has a lot of dreams. One of the things she dreams of is having a big fleet of ships with Sailfish, Sunfish, Adventurous or Chocolate in the name. And perhaps a mansion. She's not overly interested in pets, but to chase the filthy rats away she'll keep her house rat Cutiepie and she'll get a cat in the future for her house and get some extra house rats and cats for the ships she hopes to have in the future. She dreams of having a dragon, a toucan and a Krakling familiar one day.

Trinkets are fun to win and receive. These are the trinket Saeliyagil has won or received.

Saeliyagil has received very nice from crewmates and friends!

Saeliyagil loves hunting for Krakens and has been rewarded for that!

Saeliyagil likes going to Imperial Outposts and has been rewarded for that!

Saeliyagil likes going to Imperial Outposts and has been rewarded for that!