This is an article about a pirate. For the Hunter Ocean flag, see Prosperity (flag). 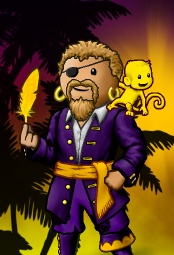 Prosperity began his Puzzle Pirates journey during Beta testing and on the Midnight Ocean. On the day it was opened, he got a fresh start on Cobalt as the lady pirates Hope and Prosperity. After spending his initial months on Cobalt focusing on the unsuccessful Dragon's Nest I with Fortune Cookies, he found a place in the The Occifer's Club, where he served as senior officer for the next few years, becoming the crew's representative in the flag Something Powerful. During his time in Something Powerful, the flag blockaded the first large island on Cobalt, Kirin Island. As Something Powerful began to dissolve, he left the crew and joined up with old friends from Midnight, in the crew Lost of the flag A Song For The Deaf. There, aside from a brief stint as captain, he served as senior officer and participated extensively in blockading.

Prosperity's next step was to join the crew Redemption under Thanos, helping it grow to become one of the largest and most active crews in the ocean. After some internal conflict, he moved on to team up with Gothmog in The Shadowy Balrogs. Together they created the flag Anonymity where he served as princess and played an active part in blockading.

After Anonymity was dissolved, Prosperity decided to remain independent for a time in the crew King of Cobalt, named after a long-running joke regarding Gothmog. He was joined there by Gothmog and a few close hearties, and they created the flag Cobalt, where he served as Princess.

At the start of the new year, King of Cobalt split up and a small remnant merged into Blackout. Pharaoh asked Prosperity to join his crew to help build it up, which he did. After Pharoah retired, Prosperity took over as captain of Mutatis Mutandis and Princess of Indestructible Fury. After his crew became inactive, Prosperity moved to Turquality where he was senior officer and became princess of the flag Trust. When Turquality decided to leave and create the flag Fuego, she did and became a founding royal of it.

A Song for the Deaf began to rebuild, so Prosperity returned to his old friends there. In December '07, they blockaded Tigerleaf Mountain in a close, 5-round blockade. Prosperity briefly served as governor before the island was taken by the Widow Queen while the flag leadership was predisposed. Eventually he flag became inactive again, so a few members split off to form Megalomania. After some time, he left to be independent in various one-person crews until his eventual retirement in '10.

Prosperity returned from retirement with the release of Dark Seas in September '17. He can now be found sailing the seas in the crew Polaris, on Cerulean and Obsidian.

On December 9, 2017, as part of the flag Tyranny, Kirin Island was successfully blockaded in three rounds. Prosperity currently spends his days on Cerulean making improvements to Kirin Island, his home since the day it was colonized, and he busies himself with his stalls on Obsidian during the calm before the storm.

Prosperity has played a role in the following blockades: