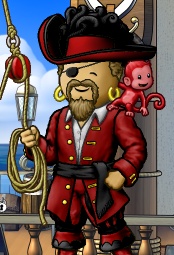 Prakamos is a pirate on the Sage Ocean. He is currently a senior officer in the crew Pernix Adaeque Simius. He divides his time between Lilith's Townhouse and Alexxia's Manor on Admiral Island.

After some time, he achieved the rank of senior officer in his crew, alongside Illumina. He stayed in the crew as they left Go with the Flow and later joined Quixotic Tangent. In Quixotic Tangent, he became a titled member and was briefly in charge of crew recruitment. He soon after left, searching for a new course.

Prakamos joined the crew Pernix Adaeque Simius where he still dwells as a senior officer.

On January 21st, 2006, Prakamos won a Sailing bakeoff on Sage. As his prize, he chose a red monkey.

Prakamos is a regular presence in blockades, having lost an eye in the first Kasidim Island blockade, on June 8th, 2006. He often acts as the commanding officer.

Prakamos has a particular liking for the color maroon, collecting trinkets, and Korr's Darkside Cookies.