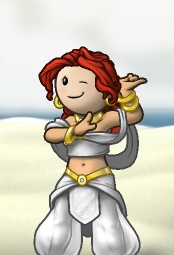 Piratusrufus began her piratey career in the fall of 2005 as a way to keep in touch with her best friend, Samos, originally on Hunter, but soon migrating over to the Midnight Ocean.

After joining Ulcicentes Victores, she quickly rose to the rank of senior officer and purchased her beloved first sloop, the Easy Angelfish and served as both princess and scribe to the flag Alpha Kai Omega.

When Ulcicentes Victores disbanded in the fall of 2007, she joined up with her friends and former allies in Plank Tarts. There she has risen to the rank of senior officer, as well as lady and sometime-drunk of Cold Steel. When real life affairs became pressing, she declined to run for re-election as a titled member, but remains a devoted and active drunkard.

She currently resides in a lovely Manor on Spring, with roomates Samos and Tarpria. In her spare time, she enjoys cuddling her dog and her husband Pilliwiggins. Her piratey pasttimes include sinking, fish collecting,Swordfight tournaments, and, of course, sea monster hunting.

PR, as she is called by friends and flagmates, is a masterful sailor and bilger. The formerly detested Carpentry is beginning to grow on her (though the splinters are rather uncomfortable). However, her Gunnery and Navigation skills remain sketchy at best. She particularly detests Distilling and avoids land puzzles on principle with the exception of Alchemistry.

PR closed all three stalls in May 2009, using the proceeds to buy her new manor and all manner of unnecessary furnishings.

PR has set the following goals: