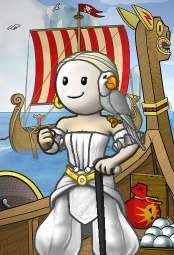 Ooriki is a pirate on the Cerulean Ocean, formerly of the Midnight Ocean.

In the days before the whisking potion, when PoE was held safely in a bank and tournaments were held locally in the inn where they were posted, a pirate named Ooriki found herself traveling to the Midnight Ocean from islands not yet on the map. She'd heard the stories of a fabled crew called Dioses Y Demonios on her journey, and upon finding herself on Cnossos Island, she took menial jobs with the navy to make the journey up to Jorvik in the Ruby Archipelago. Jorvik was home of the Looterati, of which Dioses Y Demonios was a part of, and she was determined to become part of their ranks.

Once there, she haunted the docks of Jorvik until she befriended members of DyD. She was eventually introduced to Jilu, the captain of the crew, and Llawela, the Senior Officer who would soon take over the captaincy. Llawela brought her into the crew, and when DyD left the Looterati shortly after, she elected to remain with them as they formed the new flag Superlemon Krakatoa.

Long in the shadows of the other members of the crew, Ooriki eventually discovered she had a knack for drinking. She abandoned the puzzle when it changed to include mugs, but learned to love the variation the different mugs brought to the game and later became obsessed with it. She won her first trinket tournament, called Happy Hour, in December of 2005 and never looked back. Since then, she's become one of Midnight's top drinkers, and she enjoys the competition with the other Midnight drinkers immensely. She made her way to Cobalt in early 2006, after being encouraged by inter-ocean visitors to Midnight to seek out the challenges the other oceans had to offer.

Currently, she is one of the few remaining active holdouts of the group that originally left the Looterati. She became Queen of Superlemon Krakatoa when Argos stepped down, and Captain of DyD when Peglegpaul stepped down. When Dioses y Demonios took Superlemon Krakatoa as their crew name, and the flag Superlemon Krakatoa dissolved so that SK's crews could join the new flag Phobos Et Deimos, she became one of the initial royalty. After a period where the monarchy rotated, she was voted in as the first ongoing Monarch of Phobos et Deimos.

She's normally seen wearing her favorite colors, white and purple, with her beloved parrot Rekki on her shoulder and often in the company of Yukinon. Her personal sloop, the Spooky Oori, was given to her as a prize in Bia's Spooky Vignette contest.