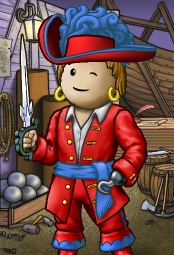 Officerjamie is a pirate on the Meridian Ocean. He is now a senior officer in the crew Le Crocodile.

Officerjamie joined the Viridian Ocean sometime in the summer of 2007, along with his friend Minikid.

Officerjamie has joined many crews during his time spent on the Viridian Ocean. The crews below are names that are easily remembered.

Officerjamie has now been a pirate for 6 years. He first started on the Cobalt Ocean late in 2006. He then travelled over to Viridian Ocean where he made his home. He has gone through many periods of dormancy since he started joining but he has always returned, even though he has thought multiple times that he was going to leave Puzzle Pirates for good. Officerjamie has taken part in many in-game crews and events ranging from event blockades to flotilla raids and mass pillages. Officerjamie finally thought he was done, going almost fully dormant from the end of 2010 into 2012. At the start of 2013, he started to think about Puzzle Pirates again and got this feeling that it was his time to return again. He has since returned to the game on January 3rd, 2013.

Journey around the ocean

In 2007, when Officerjamie was in Minikidz Sea Raiderz, the captain Minikid went dormant for a long period of time. Officerjamie was left as the only active member left in the crew, so he took this time to set up a journey he was planning to do anyways. Without jobbers, Officerjamie traveled around the ocean pillaging from Lima Island all the way down through the right side of the Jade Archipelago and into the Onyx Archipelago. He made sure to travel to every island before heading through to the Garnet Archipelago and then after viewing every island heading back up to Lima Island.

Later on, Officerjamie found out he had failed his journey to discover the entire ocean as he hadn't went to islands that pirates could only get maps for by pillage battles, like Nova Island. This became an even bigger failure after Viridian Ocean was merged to make Meridian Ocean, adding on all the islands from the Malachite Ocean as well.

Officerjamie has run many stalls in the past on the Viridian Ocean. All the stalls have been closed down either by dormancy or by forceful closing.

Officerjamie has owned the following stalls (in order from oldest to newest):

Officerjamie's first stall was a weavery which he bought after selling his first sloop, the Good Gar. Officerjamie was happy to have his first stall not really knowing how to control it at first but started learning how to run it. The stall regularly got sold out within no time at all due to the amount of money Officerjamie had to put into the stall. Once he had more money to put into the stall he started stocking it with more weavery materials. After awhile, his hemp stock kept getting ran out within minutes after he restocked it by Demo who bought tons of sail cloth for his shipbuilding stall. After Officerjamie's weavery stall was open for over a year he let it close down.

Officerjamie later on opened a furnishing stall. It took him a long time to set up the pricing for all the items because the Furniture list was huge. He soon finished the list and started selling items to find out that furnishing stalls have fast movement of buying. The stall later closed down after Officerjamie went dormant for several weeks.

Officerjamie has also managed a lot of stalls, but only a few can now be remembered:

Officerjamie was removed from managing all stalls for safety reasons after being hacked in June of 2013.

After Officerjamie sunk twice on two sloops, he later attempted to go in on his dhow with a minimum amount of people which failed. During Round 3, a war brig got brought into the event blockade. Life and Death managed to bring down the war brig with 4 sloops, which happened well Officerjamie was repairing his boat.

Life and Death needed only one more round to win the event blockade before they noticed that they were starting to run out of ships available at Prolix and therefore Officerjamie swabbie transported a few more to prolix. Life and Death managed to win the last round of the event blockade despite a paying issue part way through the last round and a minimum amount of ships left to use.

Officerjamie first bought a sloop from a shipbuilding stall on Sakejima Island. After the ship was done, he retrieved the ship from the stall. The ships name was Good Gar. Officerjamie used the Officer Bulletin Board to record all his wins and losses on the ship through pillaging. Officerjamie later painted the ship with red sideboards and blue railings. He traveled on the Good Gar when he went around the ocean from Lima through Onyx, Garnet and back to Lima wanting to sail the entire ocean. He later found out he missed a few islands. Officerjamie later sold Good Gar to get a Weavery stall on Sakejima Island. He recorded a total of 1.6k wins and around 200 losses on the ship. To this day, Officerjamie still wants his ship back but it was stuck in the crew Bursting Apart. The crew recently disbanded and Officerjamie was sure that the boat was still existing on Ansel Island. Since returning to the game, he has found out that the amount of ships named Good Gar have went from 2 to 7 and he no longer knows who has the ship, if it even still exists at all.

At the start of 2013, Officerjamie started thinking about Puzzle Pirates again. Once again having a feeling that he wanted to return again, he took his chance thinking that it was a sign he should return in 2013. Officerjamie has since returned on January 3rd, 2013. His plans for this return are endless, but he is mainly focusing on improving his puzzling skills right now.

He announced he was going dormant at the start of May after getting very bored of the game but expected to still try to get on to communicate every once in awhile.

Officerjamie was banned from playing on June 3rd, 2013 after an unknown character accessed and attempted to steal possessions from his in-game house. He was dormant at this point and time and only found out about it about a week after it had happened.

Officerjamie has decided to re-return to active play once again on June 23rd, 2013.