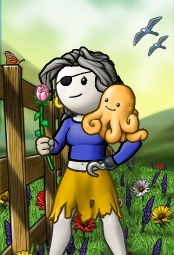 Nuemenor is a senior officer of the crew The Blackwolf Marauders and a princess of the flag Victory Raiders on the Midnight Ocean.

Nuemenor started her piratey career in December of 2004 under a previous pirate name. She soon joined the crew Rudder Duckies and, under the shiny new name of Nuemenor, began afresh with the crew The Bootysplitters in July of 2005. There, she was given tutoring and quickly rose to senior officer rank, becoming a mentor for the crew's newer players. The affinity for helping newer players earned her acceptance into the respected office of greeter in late 2005.

As she became more accustomed to the higher game, Nuemenor sought a new home with the Black Sheep Brigade. During that time she enjoyed the spirited debauchery and general shennanigans of the warring crew, and was sad to take her leave during the absolvement of the once active crew. Upon this change, she tested the waters of Viridian and became a fairly regular player for several months.

However Midnight called her home. She sought solitude in her created crew Lost of the flag Fate Amenable to Change for several months until in early 2008, she decided to find a crew that still lingered of Midnight's glory days. After several attempts, she took solace in Wyvern's Pride. She enjoyed her time there until Napalm's retirement, upon which she moved to the crew The Blackwolf Marauders. She has been there since.