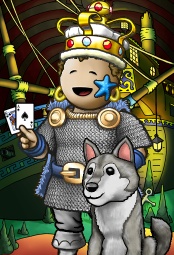 Mejestic is captain of the crew Rogues and king of the flag The Ascendancy on the Emerald Ocean.

and formerly owner of:

Mejestic started out long ago in a crew with a captain named Volatile, a titled member in the flag Vicious. In Volatile's crew, Mejestic was taught everything he knows from the captain. Unfortunately tragedy struck when the flag Volatile disbanded, leaving Mejestic without both a crew and a flag at that point. Consequently Mejestic and some of the remaining senior officers from the crew decided to found a new crew called The Rogues, which Mejestic was a senior officer in for a time. He then began to believe that he had both the knowledge and the skills to form a crew of his own. As a result, the crew Vicious Rogues was born. This new crew that he created was named after the two former crews/flags in which he had been; Vicious and The Rogues. Some consider Mejestic's new crew to be one of the best in the ocean.

Vicious Rogues was later disbanded when Mejestic left to pursue other forms of fame and fortune.

Under a horrible twist of fate Mejestic was overthrown and voted out from being the king. Mejestic then became enraged and took a break and stopped playing for a couple years. (2006-2008).

Mejestic has recently returned to the Sage Ocean and has joined the crew Majestic Storm where he was made a fleet officer. After being in Majestic Storm for a while Mejestic grew tired of a flag that seemed to be not going anywhere so he left on 7/1/09. He then joined a new crew called Imperial's Darkness where he was immediately made a senior officer. Then through a strange twist of fate the crew and the flag were given to Mejestic. Well he didn't want to start a crew in the middle so he disbanded the crew/flag and created Mejestic Rogues.

Mejestic has returned to the Emerald Ocean on 10/01/2012. Currently he is a fleet officer and diplomat of the crew Neverland Pirates under the flag Shadows of Death. But it seems like Neverland Pirates did not have what Mejestic was looking for so he left and joined a different crew. Unfortunately the new crew was sold to another crew because its captain, Sandy, couldn't hold it together, no matter how much Mejestic tried to coach him.

Therefore again Mejestic was encouraged to start a new crew, a crew that would once rise again. And that's when the crew Rogues was created. Founded on 10/27/2010, Mejestic's new crew grew to fame fairly quickly. Within 2 weeks the crew had reached the top 10 of the best crews of Emerald ocean. And of coarse with a great crew climbing the ranks, the need for a flag was introduced. After many large and very interesting offers Mejestic started the flag The Ascendancy on 11/7/2012. Mejestic and his crew are currently active and having a great time.