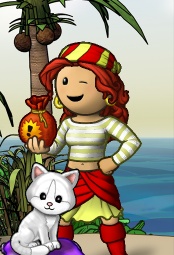 Mcadrielle is an alternate pirate of Adrielle. She sails on all of Puzzle Pirates' oceans.

Mcadrielle was created as a result of the frivolities that occurred in this thread. She was a founding member of the crew McDoodles on the Viridian Ocean. Following the ocean merge in early 2012, some of Mcadrielle's pirates received a -West suffix. She does not intend to change the names of her suffixed pirates, as she rather likes them.