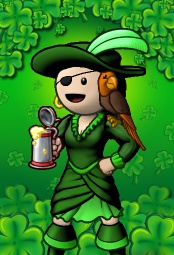 Madmarymeade is Captain of Forbidden Dreams and a member of Bipolar. She also answers to M3.

M3 washed up on the docks of Alpha Island in early December 2003. She was quickly greeted by Charon, Captain and co-founder of Children of the Damned, and stayed with those scoundrels as they tried various flags on for size. Mary served as flag scribe in Exsilium, and when CotD left the flag for greener pastures she found herself in Rogues' Pact. After a time, Charon and Lafina sought a flag of their own design, and Seraph's Nightmare was born. Mary served on the Flag Council of SN from November 2004 - 2008.

Eventually Charon needed a new first mate, and he chose M3 as Lafina's replacement in Spring 2005. When Charon handed the hat to Darksand, DS kept Mary on as first mate. The mates in CotD merged with Forbidden Dreams in early 2006, where Mary has held the rank of senior officer ever since.

In Seraph's Nightmare, all Royal slots were working positions. M3 was originally granted a Royal spot in 2005 as head of SN's Events Department under king Kaykordeath, a position she kept under queen Fizz. Later, under king Blackfletch, she passed the Events duties to Kargach, who passed his Regent's duties to her. M3 was later made head of the Diplomatic Team of Seraph's Nightmare.

M3 is much sought-after to help XO aboard large boats. She has assisted at every defensive blockade during SN's history, and XO'd most of the offensive ones as well. She lost her eye at Ostreum IX (18 Feb 2007) and commemorated the event with a portrait. Her love of blockade vessels has become a running joke in her crew, as she has the largest personal collection of war frigs and brigs in FD. She is often heard to remark, "I like big botes and I cannot prevaricate." When not helping manage the ship, M3 is most likely pumping away at a Bilge station. It is her favorite puzzle, and the crabs are a great source of amusement for her children.

Mary has hosted several events for her flagmates and the Midnight Ocean, and has one Global Event under her belt, with plans for more in the future. She enjoys entering events as well, and has won 4 parrots in various rumble tournaments. Her first parrot, Robin Goodfellow, is named in honor of her youngest son. Mary won Pumpkin in October 2007, and with his orange and tan coloring she named him after her favorite pie. In March 2008, M3 was lucky enough to win a twin for Pumpkin, and gave this twin to Marajade, her longtime friend and hearty. Mjolnir is named for Thor's hammer in Norse mythology as she was won in a hammer tournament. Andes is named for his mint and tan coloring. Bananas was named by m3's 5 year old son, and as he was won in a Foraging competiton, the name was quite appropriate.

When her crew left SN, they briefly spent time in Folie Circulaire and then Bipolar. Currently, M3 has homed her scallywags in Panic.

Since hanging up her cutlass in 2009, M3 has recently been seen around the Cerulean ocean. She will most likely be found bilging (who'd have thought?), rumbling, and attempting to memorize the "new" half of the ocean.