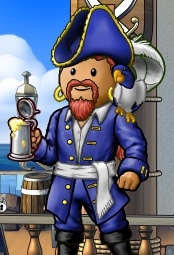 Kargach is a pirate on the Midnight Ocean. He is the captain of the crew Champions of Valhalla, and a prince of the flag Seraph's Nightmare.

By far, his most notable claim to fame is his impressive ability at the logic puzzles; he has an impressive array of titles under his belt:

Kargach won 56,000 PoE on the fourth of June, in the ninth Booty or No Booty event.

He is also well-known for his ability at the duty puzzles, and blockade navigation.