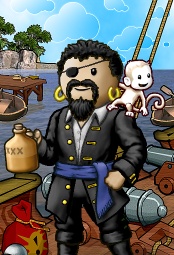 Macgreggor has been playing Y!PP, on the Viridian Ocean, since early April 2005.

Macgreggor started his pirate career in a small crew called Pirates of Middle-Earth, in the now disbanded flag Pirates Gone Wild. A quick rise through the ranks, and the meeting of certain influential people paved the way for what was to become a great political career on the ocean.

On June 11th, he left Pirates of Middle-Earth to create his own crew The Obsidian Legion, alongside three of his best mates, Rhia, Gilgamesh and Aleria. Due to his former political affiliations, this new crew soon joined the notorious flag Infierno de los Diablos some time before Kirin Island was blockaded for the first time.

Hard work and dedication rewarded him with a royalty position within the flag, as well as a seat on Antix's council of advisors.

During his time in Infierno de los Diablos, Macgreggor got the opportunity to participate in countless blockades, almost every single one in the history of Viridian. Sometimes as a navigator, but often left aside to act as an executive officer for a hired gun.

After the failed experiment that was his crew, Macgreggor briefly merged with Antix's crew, Notorious/Ace of Spades/etc... before making another jump, this time to join one of the most prominent crews of the ocean, the Ocean Generals.

Macgreggor joined Ocean Generals as a senior officer, something nobody had ever done before. Unfortunately, this new job came with a hefty price...tensions arose in the flag, accusations were thrown about, and after much arguing, Rayn took his crew out of Infierno de los Diablos, and formed his own flag, the Ocean Admirals.

The Ocean Admirals experience was short lived, and the flag soon merged with Requiem after a majority vote passed. Losing his royalty position, but still being considered as one of Maharet's trusted advisers, Macgreggor participated on the failed assault on Kirin Island, which cost Ocean Generals many ships, and took his right eye.

That disastrous blockade resulted once again in Rayn taking his crew out of its flag, but this time, to remain independent....or so they thought.

It didn't take long for the political game to catch up to the senior staff of the crew, and thus, The Syndicate was born out of the ashes of Ocean Admirals. Even two of the former crews rejoined the new flag. Once again, Macgreggor was given a crown and a fancy title...seems like nothing had changed.

Amidst all the political intrigue, flag hopping and blockades, Macgreggor met a young wench by the name of Mergen, who was then queen of her own flag. After some time, she managed to do what no other lady had done before her, and captured his heart. They got married on January 14th aboard Captain Fenrir's legendary grand frigate, the Naglfar. Mergen eventually left her flag, and joined her husband as a fleet officer of Ocean Generals.

Major disagreements between the ruling parties of the flag and the crew led to the departure of Ocean Generals yet again from a flag. This time, Macgreggor had chosen the flag over the crew, and formed his own crew out of an old floating crew... the Ryujin Corsairs were born. (Ryujin is an ancient Japanese god of the sea which literally translates into 'Dragon[Ryu] God[jin]').

A successful blockade against the forces of Evian and his flag Paradise led to a profitable governorship of Olive Island for a few months. Failed negotiations to get the island upgraded to large meant that Olive had very little potential value, unfortunately. That, on top of the flag doing poorly on recruitment and activities led to the disbanding of The Syndicate, just as a traitorous Vanguard task force was closing in for an attack. Needless to say, the island was deserted, as it was not judged profitable to waste a fleet in a grudge match.

After meeting with his senior staff, Macgreggor took his crew to Regnum Irae and reunited with a lot of old friends, including Maharet and Scupperer. Upon joining the flag, Macgreggor was immediately promoted to royalty and joined the Magnificent Seven.

With the departure of Queen Imbroglio, and the arrival of a few new crews, the face of the flag was changed. No new king or queen was elected, but due to his vast experience, Macgreggor is often viewed as the de-facto monarch, alongside Scupperer, with whom he constantly plots to try to bring some fun back to the ocean.

Unfortunately, time slowly took it's toll on the flag. Top ranking members started dropping like flies, most to retirement. Shifts on the political scene saw Regnum Irae lose most of it's allies, and the flag effectively became defunct. A change of management in former rival flag Vanguard opened a new opportunity, and some of Regnum Irae's former crews left, and performed a pseudo-merge. While this was happening, MacGreggor had retired as well from the Y!PP scene, and his crew was left mostly dormant. For the sake of not being stuck alone in a dead flag, his crew was merged with Psychopaths of the Seas.

Due to excessive boredom, MacGreggor came back to Y!PP in early 2010. Seeking a new crew and flag, he joined up with his hearty Kyriel in Taking Flight, part of his former allied flag, Antheas. This went on for a few months until he dropped out again for a while. This mostly coincided with a lot of internal changes going on in the flag. MacGreggor returned to his old alternate crew, Pirates of Middle-earth, and remained dormant for a while.

A call from Scupperer to gain access to his distillery on Terra brought him back in the game once more, joining up with his brother's flag to keep him company.

Psychopaths of the Seas

Events and other Accomplishments