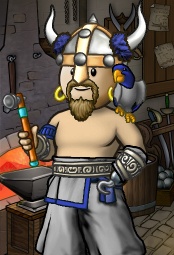 Lazylubber is captain of Malice in Wonderland and a lord of Crimson Tide on Midnight. He is also a former governor of Midsummer.

Lazylubber first arrived on the Midnight Ocean in late December, 2006. Introduced to Y!PP by Mistymate, he was taken under her wing and joined Cookie Pirates as a cabin person. After a short time, he subscribed and became a pirate. Under the tutelage of several senior officers, including Mistymate, Carina, Petry, and Angie, the captain, he began officer training in early 2007. He showed a high level of dedication and promise, and was soon leading pillages of his own as an officer and later a fleet officer in the Cookie Pirates. Lazylubber also became a regular participant on pillages within Crimson Tide. He took part in Crimson Tide's first trip to Atlantis, where he lost his hand, and served with distinction in a number of blockades both for Crimson Tide and its allies.

During this time he also began learning about the economics of the game, beginning as a manager of an ironworking stall. When the former owner decided to close the stall, Lazylubber bought the entire supply of stock and opened his own ironworking stall which he operates to this day on Papaya Island. He also began working as a manager for crew shoppes, first at the weavery The Loomy Bin and then at the tailors Winter Wardrobe and Miyu's Ribbons.

Late in 2007, Lazylubber was promoted to senior officer in the Cookie Pirates and began taking a more active role in the leadership of the crew. This coincided with an increased attrition among the crew's senior officers, and in early 2008 Angie stepped down as captain. When Madanne was selected as the new captain, he threw his support behind her and remained an active voice in crew politics.

By May of 2008, Lazylubber felt ready to undertake the challenge of having a crew of his own. After discussing it with several trusted hearties and Madanne, he left the Cookie Pirates to found Malice in Wonderland. He brought his new crew back into Crimson Tide and was soon after rewarded for his faithful service to the flag with a title.

His primary focus for many months was Cursed Isles. While his activity level has waned since late 2009, he has remained an active player and trusted member of Crimson Tide. In March 2010, he became Crimson Tide's first governor of Midsummer, a position he held for several months until stepping down in November 2010.