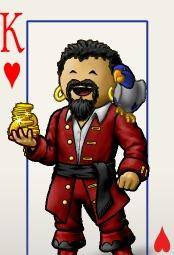 Jimisailor is a pirate that sails on the Meridian Ocean and the Emerald Ocean.

Jimisailor started his pirate career on the Viridian Ocean in May of 2005. Sometime in 2007, he was hacked, and the pirate Jimisailor was lost. He started a new pirate named Puresailor and played under that character until the ocean merge. He then collected a number of rogue marks and reclaimed the name Jimisailor. In 2014, after a period of dormancy, he started his piratey activities again, this time sailing mostly on the Emerald Ocean. He enjoys hunting skellies, zombies, werewolves, and Brigand Kings. He also enjoys venturing to the Cursed Isles, and has a black box addiction.