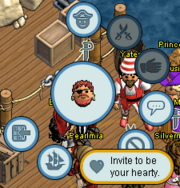 Hearties can be invited using the player radial menu.

Players add hearties by clicking on another character and selecting "Invite to be your hearty," at which point a confirmation screen is sent to the player in question.

Players can be removed from the hearty list by finding them in the crew panel on the sunshine widget, in the Me Hearties area, possibly offline. Clicking on one will give a menu of options, including "Remove as yer hearty".

A pirate can choose to show all or some of their hearties on their info page. Clicking on the 'Manage yer hearties' link from a pirate's own info page will enable them to set 'Secret' hearties (hidden from the list) or 'Top' hearties (a hand-picked list of pirates to be displayed on the info page).

If either pirate marks the other as secret, neither hearty will show up on the other pirate's page. In other words, both pirates must have the relationship flagged as non-secret for it to be displayed at all.

With release 2006-10-17, hearty lists were added to pirate info pages and the maximum number of hearties was further increased to 150.

With release 2009-07-01, non-subscribers can send hearty invitations on subscriber oceans.

With the ocean merge, the maximum number of hearties was further increased to 300.[1]

With release 2017-06-14, the maximum number of hearties was increased again to an as-yet unknown number.