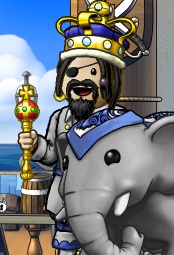 Hazadaki is the captain and mascot of the crew Band of Brothers and king of the flag The Brother Hood of the Hunter Ocean.

Hazadaki started his life on the Hunter Ocean in the spring of 2007 and quickly joined the now defunct crew Quetzal Corsairs. Following the disappearance of the crew's captain, Richeleu, Hazadaki joined the crew of his monarch, the El Cielo Azul, captained by the infamous Darksoul.

Having worked hard with the crew since the summer of 2007, Hazadaki obtained the rank of fleet officer. Unfortunately, due to drinking problem, combined with the fact that Hazadaki only spoke via an incomprehensible series of clicking noises, he was unable to reach his full potential of senior officer within the crew.

Distraught over the disappearance of his old crew, Hazadaki retired from pirating in late August 2007. During rehabilitation, for drinking, Hazadaki discovered a previously hidden talent for Bilging and sought to put this skill to use. Therefore, after four months of retirement, Hazadaki returned to El Cielo Azul quickly achieving the rank of ultimate in bilging and with this feat was subtly titled bilge rat. After announcing he was British, however, Hazadaki was cunningly retitled the crew idiot.

After Darksoul's departure from Puzzle Pirates, Hazadaki turned to the only crew that would accept him for who he was (still a total idiot), and therefore became senior officer of the crew Melabolgia under the captain-age of Jarnie and Vidiella, who Haza had previously met in El Cielo Azul.

Sadly, this was not to be. Jarnie, having left for sunny Spain, once again left Haza alone. Tired of being on his own Haza finally plucked up the courage to start his own crew and worked hard to perfect all his stats to Grand-Master. He is now happily the captain and king of one of the best crew and flag on Hunter. And he welcomes anyone to share his happiness by joining the crew.

Hazadaki previously lived in a townhouse on Quetzal Island with his captain Darksoul and Senior Officer Archonis. How Hazadaki made this prestigious position is unclear. Some claim that Hazadaki paid for the Crew-Bar, the Castigo XXX thus effectively buying himself into the house. Others claim that Hazadaki impressed Darksoul with his loyalty, commitment and sexy legs. However, the truth, although somewhat disappointing is that Darksoul, tired of being alone is his big house, ordered Hazadaki to reside with him as his pet monkey by the name 'CoCo the Chimp'. Touching CoCo is not advised as years of abuse (mainly being poked with a stick) has made him temperamental and liable to attack.

However, he has since purchased a 1.4 Million-PoE crew-villa on Aimuari and shares it with his advisories Teletubbies and Prince Tbread. He encourages all to visit, especially the crew bar: "Boose of Brothers" where Haza frequently holds 50k tournaments, which are free to enter and provide a great source of entertainment.

Hazadaki spends most of his time memorising routes to make him appear to be a good officer. He is also a keen pillager and will often borrow others hard-earned ships to pillage. Despite owning his own fleet of war frigates and war brigs.

He is also a keen blockader and is frequently seen winning event blockades in which he often hands out large bonuses and prizes to those who attend.

Hazadaki is also a greeter and can often be found, if Darksoul has let him off his lead, greeting new players to the game on the Aimuari Docks. New players maybe lucky enough to receive gifts off Hazadaki as he often carries rubbish he no longer requires.

Hazadaki was a fleet officer and mascot of the crew El Cielo Azul. He was proud to be a member, and placed confidence in Darksoul the captain who, having ultimate Battle Navigation skills, and much blockade experience, daily led the crew to many victories.

Due to the nature of the crew, however, crew members were invited as a privilege. Perhaps one of the strongest flags and crews on the Hunter ocean, Darksoul had to be confident in the skill of his crew members. It was therefore advised that pirates pillage with them. If they were able enough, and were willing to join the crew, even if this means leaving their current one, they would be invited into a life of luxury.

The Downfall of El Cielo Azul

In the June of 2008, following the opening of the new ocean Malacite, the temptation proved too much for Darksoul. Abandoning everyone dear to him, including his loyal crew, Darksoul left all in an attempt to dominate fresh-waters.

With many senior and fleet officers answering to the call of their lonely captain, the crew was left in disrepair, without clear leadership or motive.

Hazadaki, however, hopes to overcome this problem by recruiting members to join the once-prestigious crew. Failing this Hazadaki aims to build his own crew in the summer of 2008.

The Band of Brothers

The Band of Brothers crew is currently captained by Hazadaki and has access to 100 ships. More information will be posted here when available.

Hazadaki wishes to own 3 grand frigates. Not only as a contribution to his blockading crew, but also because he dares enemies to mess with him with those big guns in their faces. Has been achieved

In the near future Hazadaki wishes to own his own crew and form a great alliance with El Cielo Azul. Together, they will rule Hunter, as their motto is 'Aim for the skys'. However, for now, he is just happy to receive his daily banana from his captain.

Hazadaki has taken part in the following blockades: