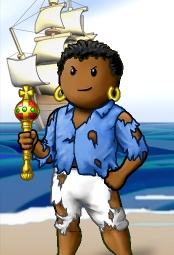 Darksoul is Captain of the crew El Cielo Azul and Monarch of the flag Castigo X on Hunter Ocean.

Darksoul started his pirate career in the early Azure Ocean, under the name of Twister and was an officer of the now defunct crew Mad Mutineers.

Darksoul/Twister then moved over to the Midnight Ocean as an independent pirate with the ambition of assisting hearties in their blockade attempts and influencing the political game as an outsider.

During successful tenures as a bnavver on Midnight, Darksoul took a break from the game early January 2005, and returned in August 2005 as Bbkiller when Sage Ocean opened. Here, he joined the flag Hardcore Explorers in a political role.

During this tenure, Darksoul took a side project to capture the island Blackthorpe for the flag The Infested where a shipyard was his reward.

Unfortunately, this was a political disaster, as members of the other flags put pressure on Darksoul, and when word that Hunter Ocean opened, he decided to make a fresh move, and settled.

Darksoul used to be called The Shadow by his hearties for his behind the scene political movements.

On Hunter, Darksoul led the flag's Castigo Final and Castigo X. The latter became famed on multiple ocean's for being among the first of flags to blockade for fun instead of island ownership. The flag was notorious for its skill in applying this particular playstyle.

Darksoul being active in the blockade scene since the feature was released is rumored to have been involved in excess of 500 blockades as a navigator or Admiral.