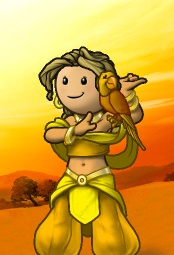 Goga is a pirate on the Midnight Ocean, the captain of the crew Red Diamond. Her crew is flagless. She was the first pirate to own each type of familiar (monkey, octopus, and parrot) at the same time on the same ocean of Midnight. She is perhaps most famed for her expansive empire of shops on Alpha Island which include every type. These include:

On the Cobalt Ocean she owns the Sakejima Inn The Underworld and the distillery shoppe Evil Spirits on Sakejima Island.

She won her yellow octopus in the Familiar Ship auction of March 2006. She exchanged 55 war brigs and 6 merchant brigs for her octopus.