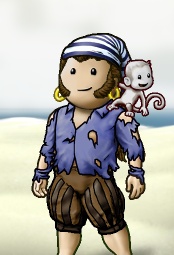 Ptg is a pirate on the Midnight ocean. He is perhaps better known as Ponytailguy from the Y!PP forums, and answers to PTG, Peeteegee, Ponytailguy, Teeg, and a plethora of other names.

Joining the game in early August of 2005, and originally playing as a female character named Sheilagh, he quickly gained an affinity for the sailing and alchemistry puzzles. He joined The Runners of the Waves, and subscribed shortly thereafter, rising to the position of First Mate and Senior Officer within that crew. However, after some disagreements with the captain over choice of flag and general direction of the crew, Sheilagh left and started her own crew, the Jorvik Merchant Company.

The Merchant Company ran for just over a month, and PTG spent most of that month quietly shuttling fruit around Ruby. He had always been something of a forumtart, and as luck would have it, as a result of some his posts found himself invited to join The Phoenicians of the Black Sheep Brigade. While he initially resisted the offer, a few posts made by then-prominent member Rummykins piqued his interest, and Melanthe dockpressed him in late November. Shortly thereafter, he stopped playing as Sheilagh and registered Peeteegee, which became his main until October of 2006.

Not an especially distinguished duty puzzler (although he does have sporadic Ultimate in sails), PTG can usually be found playing the social puzzles instead. He has organized or helped with a number of events, ranging from smaller ones with 10k prize pots all the way up to familiar-awarding showdowns. He also enjoys sinking PVP a good deal, and has helped organize several of the Black Sheep Brigade's blockades since he joined the flag, typically serving as a jobbing and parley contact. Nonetheless, he is known to waste hours playing the various card games as well as treasure drop, although the forum puzzle will probably always be his favourite.

In August of 2006, nearly one year exactly after joining the game, PTG won a grey monkey in the Oh noes! Where's my nose? forum writing contest. His frequent event collaborator, Feylind, had won a parrot in another writing contest just over a week prior. He finds this amusing and poetic.

In early September of that year, he broke the link he'd had with the Phoenicians, and was encouraged by Padore to join the emerging crew of Empires Fall, which he did. In late October growing increasingly frustrated with certain elements of the flag, he left the crew and turned independent. Shortly thereafter, he finally bit the bullet and changed his pirate yet again, deleting Peeteegee and moving all of his assets to a new pirate named Ptg. Stated reasons were a desire for a fresh-ish start, and annoyance with being called "Pee" and "Peet" (which he thinks sound like urine and a fart, respectively) by random strangers. He remained independent for several months, before finally joining Sinking Feelings of Widows and Orphans in May of 2007.

In late June of 2007, he was suspended from the game, for reasons he disagreed with. While he successfully banpleaded the suspension, he decided not to return to the game after the suspension had expired, and logged on for the final time to entrust his beloved monkey to longtime friend Feylind, who would, in turn, give it to Jerze. He has not logged on since.

PTG has used a number of different avatars on the forum, all of them reflecting his fondness for navy and brown clothing. He is a noted patron of Empanado, buying nearly all of his avatars from him. His most current ones: