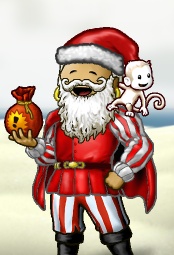 Faulkston drifted onto a beach on the Azure Ocean in August of 2003, like one of the countless pieces of flotsam bobbing across the oceans wide. He joined the crew All Trades under the captaincy of Dmentia and rose to senior officer rank, witnessing the formation of the flag Omphalos, its colonization of the island Hephaestus' Forge and the poignant close of the Azure Ocean.

Under the able leadership of Dmentia, All Trades transformed into Red Dawn on the Midnight Ocean. This crew was one of the founding members of the flag Midnight Armada. Faulkston retained his senior officer position in the reborn crew and later joined the ranks of the flag's royalty.

Faulkston was interim governor of Winter Solstice for a few weeks[1]. He was sunk in the third Park Island blockade and received a hook.

The advent of the ocean merge saw the Midnight and Cobalt Oceans become the Cerulean Ocean, where Faulkston continues to sail.

Any player who has ventured into the Puzzle Pirates forums for a decent length of time will know of Faulkston. He has become legendary for his search-fu in the forums, specifically his ability to provide links to answer any and all questions that have even been hinted at in the past. Such linking has given rise to the forum fad of using his name as a verb.