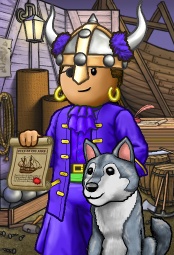 Dudusierra is captain of the crew Kroengard on the Viridian Ocean. He's king of the flag Alria, always working hard at flotillas. He is also fleet officer of the crew Essence of elites on the Crimson Ocean. His biggest enemy is Vargas the Mad, the first Brigand King to give him a real 30 minutes 1 vs 1 Rumble. He has never stopped hunting Vargas, always killing his flotillas and stealing from Cursed Isles.

Playing since 2006, Dudusierra got his main account deleted in 2007. In January of 2008, he came back, creating a new account with the same name. He joined Dark Revenge as his first crew, when Illegitimate was a temporary captain. When Hayk took the captaincy again, he merged the crew with Squid Squad. Dudusierra was a independent pirate until Orhanbaba, Heartslayerr and Illegitimate recreated Dark Revenge. As one of the first old members to come back, he was ranked senior officer, and as one of Illegitimate's old friends, he was titled counselor. In April 25th of 2006, he met his biggest enemy, Vargas the Mad, on a sloop pillage he was hosting. In a hard battle, the battle ended as a duel between Dudusierra and Vargas the Mad. Due the lag of the server, Dudusierra got disconnected and Vargas won. He has never forgiven this awful lose, then he always kills Vargas or his officers anywhere he can meet them, mostly in Cursed Isles and Flotillas.

In 2008, Dudusierra left Dark Revenge because of personal problems with Sea Wrath, coming back two weeks later, at Msrambonette's, Alivi's and Illegitimate's request. Since that time, Dudusierra has been one of the most important of senior officers in Dark Revenge. In December of 2008, he did Sea Wrath's blockade battle navigation test, and failed it. Then, he tried to get on the blockade battle navigators team via other ways.

On January 26th, Dudusierra decided to move to Warlords, accepting Tulbik's invitation, wanting to be future royalty of the flag Rebel Raiders and blockade bnaver. But Tulbik did not provide the things he had promised. So, Dudusierra left Warlords and came back to Dark Revenge, on January 29th. On March 24th, he got engaged with Kikas, another senior officer of Dark Revenge. In April 2nd, He became the newest captain of Dark Revenge. On the Tigerleaf Mountain blockade (Sea Wrath versus The Never Ending Storm), he did his first blockade battle navigating. But, because of Luxory's leaving, he hadn't the chance of getting big ships, but he, battle navigating a sloop, sunk a sloop in the board. After much hard work at Harmattan Island's flotillas (two flotillas spawned in the following weeks), he ordered the construction of a shipyards in Labyrinth Moors, in order to support his crew's needs and his friend's flags. The shipyard got built on June 15th. On August 23rd, because of his friends leaving, he left Dark Revenge, giving the captaincy back to Illegitimate. After his leaving, he created a new crew, based on elite status, named Pillars of Eternity, together with Kikas, Captnscream and Maxmee. On August 29th, he got divorced from Kikas, because of an argument caused by crew problems.

Ksb offered him a shipyard to buy on Napi Peak, an offer that Dudu accepted, selling Sea Wrath Flotillers. Grounded without access to Puzzle Pirates, caused by bad grades at school, Dudusierra got depressed because of his absence and the loss of Kikas. Because of that event, the balance of peace of Pillars of Eternity crashed, causing many arguments and fights. Even when Kikas came back, argues were still happening. In October 18th, he got a black/silver karkinos for lazing on Crazyfor's and Kagan's SMH, while doing a pillage. In october 23th, he left Pillars of Eternity together with Kikas, joining Squid Squad as a senior officer. In the moment the joined Squid Squad, he accepted Kikas's marriage proposal. So, in October 23h, he started his Squid Squad era.

On December 17th, Kikas and Dudusierra got married inside Atlantis, in the map Secluded Bastion. Rhapsodie was the priestess of the ceremony, that was followed by a SMH trip, as the wedding party.

Sadly, on January 17th, after being kicked out of the house that was given as wedding gift, Dudusierra and Kikas divorced, making another abyss on Dudusierra's heart. Still sad about the divorce, he started a campaign to get his first familiar, doing massive CI trips and staying almost all time on SMH. After having some classes and playing MUCH poker, he finally bought his first familiar, a tan/maroon parrot, which he named as Kroengard.

After many months at Squid Squad and years at Sea Wrath, He left and made his own crew named Kroengard, under his own flag, named Alria, at July 2010. He went off the game for some months but as soon as he got back, about January 2011, he started developing his crew and flag more seriously.

Dudusierra is one of the few pirates on Viridian Ocean who has killed a flotilla in less than a day, it was recorded as less than 12 hours, in a solid attack, filling six war frigates one after other.

Dudusierra got a black/silver karkinos in a Squid Squad's SMH.

Dudusierra won a 1 vs 7 inside the Cursed Islands, for Vargas's sadness.

"For Eternity, we will stand, protecting our friends, fighting our enemies, because that's what we do best"
Dudusierra, August 23th 2009
Retrieved from "https://yppedia.puzzlepirates.com/index.php?title=Dudusierra&oldid=694510"
Category: