This article is about a Meridian Ocean pirate. For other entities, see Diamond. 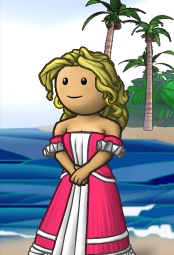 Diamond is currently captain of the Bootleg Bandits and monarch of the Moonshine. She is one of the friendliest pirates on Meridian Ocean, fiercely loyal to her hearties and enjoys helping other pirates.

Diamond's pirate adventure began at Christmas 2006 on the retired Viridian Ocean. She first joined the crew Reality, but found it was too big and impersonal so she joined the elite crew Ghosts of the Seven Seas shortly after. She enjoyed being with this crew but grew restless to try her hand at battle navigation so she decided to leave this crew since their high promotion standards would mean waiting a long time to become an officer.

In May of 2007, Diamond joined The Omnipotent Mystics where she was immediately promoted to senior officer rank. While she liked this crew, her stay with them was short lived due to their inactivity.

In June of 2007, Diamond joined the Bootleg Bandits, and was immediately promoted to Senior Officer. She worked her way up and eventually was made captain after Downtown left for real life adventures. She also ended up becoming monarch of the flag Bandits of the Ocean. When the other Royals also left for other adventures, Diamond moved the crew to the flag Brink of Dawn. In June of 2008, Diamond was appointed princess of Brink of Dawn. In July of 2009, she became governor of Windward Vale. In September of 2009, the crew reached 3rd in crew fame.

In November of 2009, after Brink of Dawn captured Cochineal Island, Diamond and Falbard decided that it was time for some new adventures so they decided to form their own flag. On November 15, 2009, Moonshine was created.