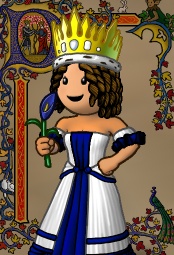 Daftsadie is a pirate on the Emerald Ocean. She is currently ranked senior officer and cartographer in the crew Socialist Utopia, is a princess of the flag Canada and she is the governor of Cryo Island in the Puffin Archipelago.

Daftsadie started to play YPP on September 5, 2011. Her first ever captain was Benazo. Then she joined to the crew Rising Phoenix (thanks Incandis). In January 2012 she joined to the crew Twisted Legend (the base/origin crew of Twisted Intentions), then finally she found the crew: Royal Assassins Brigade in July 2012 and she wasn't planning to leave it for long years. :) She found many friends in that crew, least to mention Latix who became one of her closest friends and who she led RAB with. In 2018 she felt she didn't want to just "guard" RAB (what she always considered as Goadreamer's crew, even though she got captaincy and still she is captain of that crew with her alt) but wanted to be part of an active and family-kind crew. That's the time when she met with Redshorts, they became friends, then very close friends, then very very very close friends fast. This was the direct consequence of Daftsadie joining his crew Socialist Utopia in October 2018, then helping and supporting him in founding his flag Canada in December 2018.

Daftsadie likes the navigation puzzle and has decided to memorize the whole ocean. She finished all route on Hunter side on September 25, 2012 and on Sage side (so on the whole ocean) at May 13, 2013. Since then she is the charter of her crew/flag/friends.