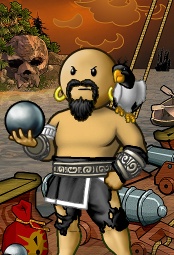 Cohog is a senior officer of Yarr Talk in the flag Static Before the Storm.

Cohog started out on the Cobalt Ocean in wee crew of Dragon's Mercy under the flag of Dragon's Fury, under the captain-ship of Skovran. Dragon's Mercy merged into Dragon's Blood, the main crew in the flag, shortly after the implementation of fame. Dragon's Fury blockaded the island of Terra on its opening on August 6, 2005 against the flag of Hurricane in a 3 round sink-fest. Two weeks later, Dragon's Fury successfully defended the island against Valor. Being an inexperienced and not very rich flag, they later gave the island to Hurricane and since have nearly faded away.

Cohog then moved into the crew The Shadowy Balrogs, led by Gothmog. He stayed there for a while, including when the Balrogs moved into the flag Indestructible Fury. As the Balrogs started to die out, Cohog left to join Thanos in his Cobalt take-over. Cohog quickly caught Thanos' eye, after getting Thanos' crew Redemption to Imperial pvp status in 2-3 days. He later became Thanos' first mate and right-hand man. Redemption rose to the number one rated crew in the ocean in a matter of weeks, with their flag of Ascension becoming the number one rated flag. They blockaded Labyrinth Moors, a large island in the Onyx Archipelago. The island was then defended successfully against Song for the Deaf and Apoy in a slaughter-fest. Since then, Thanos has taken an extended leave from the game, and Cohog has taken control of his crew, Redemption.

Cohog is most well-known for his all-around blockade skills. He has been the admiral of many large-scale blockades, and even has been involved in blockades on all 6 oceans. He has led blockades on 3 of those oceans: Cobalt, Midnight, and Sage. He was the admiral of Notorious Fandango's Big Ass Blockade on Midnight, beating Silver Dawn in 5 rounds, the last round by a 7 point margin.

After a large arguement with Bibity, Cohog and some of his mates left and joined Yarr Talk and captain Cybrpyro. He orchestrated participation in The Great 24 hour Ocean Blockade Part 2, thereby helping win 2nd place, and choosing the tailor shop, Knights in White Satin, on Dragon's Nest, the #1 profitable shop on the ocean.

Since Cohog's return, he has participated in many blockades and events ran by Static Before the Storm. He helped Static take Kirin Island from Valor, as well as give away Fintan Island in a oceanwide war brig race. He was also given governorship of Labyrinth Moors by Morbuzaan to enact his shop-dusting governorship plan. He has also helped build the flag Barely Dressed on Malachite Ocean.

Cohog plans to remain active in blockades, events, and the flag Static Before the Storm.