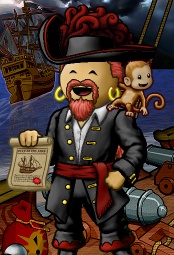 Cybrpyro washed up on the shores of Lima Island in the summer of 2005 and shortly after joined Yarr Talk. He worked his way up the ranks in the crew quickly and became a prince in the flag National Pirate Radio and senior officer in Yarr Talk by October 2005.

When the captain, Crowshay, needed to take a break from her position, Cybrpyro took over captaincy of Yarr Talk in November of 2005 and has been the captain ever since. Since then Yarr Talk has moved on from National Pirate Radio and founded their new flag, Static Before the Storm.