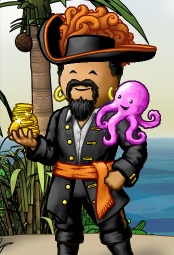 In November of 2005, a green pirate landed on the docks of Lincoln Island. Booterken jobbed for a variety of crews, liking some (Poseidon's Tricorne), hating others(Fire Ball), until he jobbed for the Irish Rogues. There, pirates were joking and laughing as they pillaged. Booterken knew he found his home, and joined the crew. Within a month he was promoted to officer, by January, fleet officer and in late February, senior officer and lord in the flag Rogues of Sage.

In April, he left to form his own crew, The Dark Imperials. Soon, Booter was captain of the crew and king of the flag High Tide. The Dark Imperials blossomed under his leadership, growing to 250 members in 3 months.

Booterken is currently senior officer of the crew Tales from the Deep, Lord of the flag Jigsaw Tessellators and deeply in love with Sedna.

"Ladies and gentlemen , this awkward silence in crew chat is brought to you today by:"

"If you are looking for the best in pirate apparel"

"So remember.... Thats Booterken's for your clothing needs. On Wensleydale!"