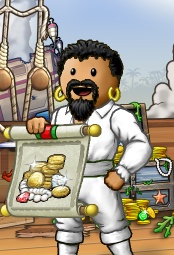 Bloodyeddy sails on the Meridian Ocean, although originally from the Viridian Ocean.

Although first setting sails on July 27, 2005, many of his former incarnations were deleted due to inactivity with only the current account being established during June 2008.

As every pirate begins, he was assigned to the bilge. He grew in skill quickly and soon found himself in a crew. Being unsatisfied with the pirates around him, he began to crew hop until he found himself his first true crew, Army of Darkness. Gaining notoriety, he eventually voyaged with Cangry, Linklord and Ingi. Attempting to maintained a steadfast friendship with them, he only succeeded in gaining favor with Linklord. Linklord would mentor him in the arts of distilling and drinking.

Education had forced Bloodyeddy to cease playing, but upon return he was shocked to have found his account deleted. Quickly making a new account, he tried in vain to talk with his old hearties as they all became were dormant. Thus, he set off to find a new crew.

Fair winds met him as he made acquaintances with The Dark Tide, joining them after being impressed by an immensely successful pillage. He had then encouraged Rogerhunt, a real life friend, to enter the crew. Together they became officers.

Another hiatus forced his account deleted once again, but he quickly remade and rejoined the crew, ascending even higher to the rank of fleet officer. Both of them became fair friends with Captain Stahowey, and various senior officers including Varsevius, Juice and Gwennith. On December 21, 2010 he was promoted to senior officer rank. Popularity among his mates grew, allowing the title muse to be bestowed upon him.

On July 28, 2013, after along another long hiatus, he returned to Puzzle Pirates. Noticing his crew was almost none existent, he spoke to his flag's leader, Monlizzy, and entered Midnight Aurora. Demoted to fleet officer, he embarked on another journey towards the top.

Bloodyeddy tends to only play Puzzle Pirates during major breaks from school such as Spring Break, Christmas Break and Summer Break. He rarely plays at any other time.