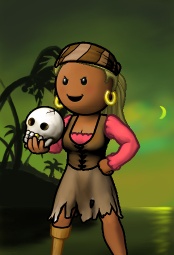 Stahowey is the captain and drunk of the crew The Dark Tide. She is also a princess of the flag Imperial Coalition. She governs Tigerleaf Mountain and formerly governed Ansel Island.

Stahowey refuses to disclose her first crew but she was an officer in that crew. She also refuses to give name of flag where she was a titled member.

She later moved to Royal Fleet where she achieved the rank of senior officer and gained royalty rank in the flag Imperial Banner. Then on June 25th 2007, after much thought and deliberation, Stahowey decided to form her own crew, which she marks as her greatest acomplishment as a pirate.

Stahowey has been a great fan of pets, and has a large collection of them. Her first pet was her rat Stinky. She would then over her piratey career get a cat (Nakita), and four dogs (Snowy, Mountain, Mojo, Sacha). She hopes to buy another dog and name it after the beautiful and amazingly funny (and charming) pirate Pole. (who probably wrote that)

Stahowey enjoys Sailing and Swordfighting the most out of the entire wide selection of puzzles in Puzzle Pirates. In her free time she is known to play poker. Her major strengths in Puzzle Pirates are Sailing and Battle Navigating. She is also well known for helping lost greenies (and officers at times) and being one of the bestest captains in the ocean. =]

When asked this question Stahowey put it short and sweet, she wishes to "Make the best of my crew and flag".

She also has the Goal to eventually update the Crew's Yppedia page.