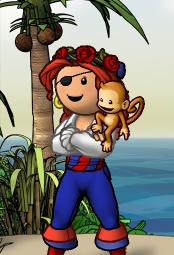 Berryboo is one of the most established pirates on Midnight Ocean. She is a senior officer of the crew Britsh Bandits and Princess of the flag Vexillam Odiamus. More importantly, she is a merchant extraordinaire.

On Beta Island she owns a tailor A Stitch In Time, a distillery I, Rumbot, a shipyard Wind Dancers, an apothecary Endless Hue, an iron monger Dreams Of Steel and on Vernal Equinox a weavery Lubber Linen. A Stitch In Time has a good collection of clothing on the Midnight Ocean. It is a fully expanded shop and has a full (nothing else will fit) rack of clothing, with many matched outfits, because Berryboo just can't stop making the things. In addition to her shops she also runs many stalls - 3 weaveries, and a furnisher (most on Beta also). She's always helping others get their stalls/shops up and running. She has since sold I, Rumbot, Dreams Of Steel, and Lubber Linen and closed all stalls. She has been in a semi-retired state since about 2010 but still maintains her remaining 3 shops on Beta.

Berryboo has been playing pirates since early 2004. She has gone through many "phases" of the game: pillaging for hours a day, hunting for skellies when it was a true hunt, foraging for cool stuff, sailing from island to island to gather PoE, blockading that went on for 12 rounds, and now flotillas, Brigand Kings and Atlantis... and making new friends each and every day of those years. She is in the market scene of the game and has made a lot of friends through that.

She has been a British Bandit for all but a month or so since 2004. The crew is now non-political and has been for a while. Bandits is a very tight-knit group of people from all over the world. They are much more of a family than people who happen to play a game together. With being non-political, Bandits tend to attract the long time players who are ready to retire but don't want to leave the game.

In April of 2007, Berryboo offered up her rags and sticks to her captain, Brummieboy, so he could enter the Odds & Ends forum auction for a familiar. He responded by saying "why don't you enter it." That started one of the funnest and most memorable events that she will never forget. Many crewmates and a few hearties grouped together and spent many hours scouring the Midnight Ocean for rags, sticks and fish. Many of them spent their own PoE in their explorations on Boo's behalf. When it came time for the auction to end, Boo and her mates had ended on top and won, the now, Mr. Biggs. No one had started saving anything for this particular auction beforehand, it all happened in a few short weeks. It was incredible. Mr. Biggs was named by Brummieboy, after a real life British Bandit. Boo sends thanks to Brummieboy, Feylind, Jerze, Daz, Daynarius, Cheshi, Mousebeard, Renegaderose, Brattyandi, Carebear, Jadoo, Sunstone, Zanered, Axinite, and others.

Be nice to Boo! Otherwise, the ghost of Digbads will rise in vengeance from the grave!