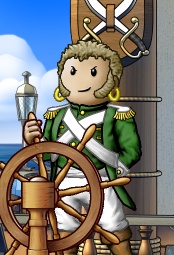 Arminius is a senior officer and steward of the crew Look to Windward on the Midnight Ocean, and lord of the flag Blighted. He is currently based in Jorvik Island and owns a distilling stall in the Brewburg and an apothecary stall in Huetopia.

Arminius (mostly referred to as "Arm" or "Armi" by his fellows) was first stranded on Turtle Island, sometime around August 2004. After learning the ropes, he joined the Midnight Valkyries of the flag Ragnarok, where he was promoted to officer soon after.

Following a disagreement with royalty on booty shares, Arminius, together with Rickyone, formed the crew The Cheruscan Hammers, but was not allowed to stay with Ragnarok. Immediately after Gaea II, the Hammers joined the flag No Homers (later renamed Lost Legion), who after the summer of 2005 merged with Perle Mond, and then with Rum 'n Blood D'Oh, which shortly after decided to move to the recently opened Cobalt Ocean. Unwilling to leave everything behind, Arminius joined The Imperial Fists, the last remaining crew of the original No Homers, and served as a prince of Lost Legion before the formation and after the break-up of Heavens Aligned.

After a long stint with the Knights of the Republic, Arminius rejoined some of his old crew mates from No Homers in the crew Keel Appeal. During the second half of February 2007, Arminius had to move temporarily to the crew Gods Of War to circumvent an embargo on Jorvik, caused by a war declaration on Tyr's Own by Jamesdoom as part of a pirate auction.

On March 30th, 2007, Arminius was bought out by Onelove and Dbavirt of Gods Of War, who offered him control of the distillery shoppe The Wrath of Cane on Guava Island, if he joined their crew. In less than a week he returned and stayed with Keel Appeal until they disbanded in June 2007.

Arminius can also be found on the Cobalt Ocean from time to time. He was a senior officer of Rum 'n Blood until they merged with Kraken the Egg. Since then, his work as a crew and flag historian has gained him the rank of senior officer and scribe of the crew.

Arminius is the deedholder of the following renamed vessels:

The following avatars were given to Arminius by fellow pirates and have been used in the YPP forums, as well as in many crew and flag forums.