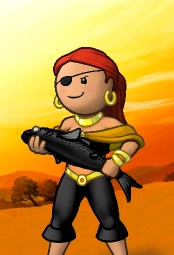 Silkprincess sails out of Xi Island on the Midnight Ocean.

Silkprincess is the founder and captain of Innuendo. She was the queen of Booty Grabbers since the flag's founder stepped down and recommended her as his replacement.

In June of 2006, the crews Dagger Revolution and Savage Squids decided to essentially merge the Booty Grabbers flag with their long-time hearties of Black Sheep Brigade. Over time, many of the members of Black Sheep Brigade decided it was time to move on and now continue to pillage bars together in real life, but play separately in Puzzle Pirates. She still returned an alt Brightnights to the Booty Grabbers flag as Monarch. Innuendo and Savage Squids have merged as of March 10, 2007 and chose Tyr's Own as their new home flag.

She is probably mostly known for her shopkeeping addiction. Chemicalgirl collects ships with the fishname "Chub" among other interesting and unusual renames.

Silkprincess also has almost all of the league points on the Midnight Ocean memorized. Though Xi Island is her home, Guava Island holds a special place in her heart, as demonstrated by her call for its liberation from Notorious Fandango, spawning a lengthy debate on the main forums during the summer of 2005.