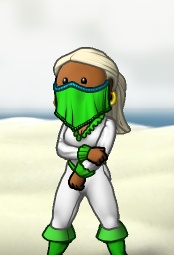 Scrappyilse lives on Fintan Island on the Cerulean Ocean and on Port Venture on the Obsidian Ocean. On the Cerulean Ocean she is a senior officer of the crew Sweet Longings and she is a lieutenant commander in the Fintan Island Navy in the Onyx Archipelago. Her name comes from the hobby of the woman behind Scrappyilse. She started out as a mere alt of Scrapper, but soon realized she wanted to grow on her own and left Scrapper. On the Obsidian Ocean she has just started out and is an independent pirate.

Scrappyilse washed ashore on the island Labyrinth Moors on the Cobalt Ocean. Before starting to work for herself, she had helped out Scrapper with a lot of things. At some point she realized she not only wanted to support Scrapper but also wanted to grow on her own. That's when she decided to become an independent pirate.

As an independent pirate she decided to work hard on her Piracy skills so that she could start her own crew. At the same time she still learned a lot from Scrapper, since she's still with the Full Moon Rising Crew.

Scrappyilse moved to Fintan Island when she had bought a Row House there.

On March 14th, 2008, Scrappyilse founded the crew Sweet Longings. She has since handed over the captaincy to Sandyiagil.

Merger of the Oceans

After the merger of the oceans, Scrappyilse found her home on the Cerulean ocean.

Scrappyilse has a few dreams, like all pirates. She dreams of running her own crew someday. But first she wants to start her own Tailor. Maybe she will open up a supply chain for the tailor, but she hasn't decided on that yet. She's working hard to save all her poe to be able to start this tailor and to get it running stable. After that, she might start recruiting crew members.

On July 28th, 2018, Scrappyilse washed ashore on the island Port Venture on the Obsidian Ocean. As an independent pirate she decided to work hard on her Piracy skills so that she could perhaps one day start her own crew.

Scrappyilse can be found on the Ice ocean sometimes, but that's usual to test the newly introduced things before they come onto the other oceans.