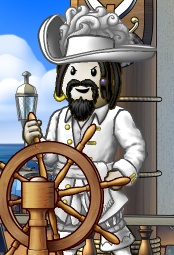 Zamolxis can be found sailing the Sage Ocean.

Zamolxis started his pirate life peacefully by dealing in used merchandise out of his humble shack. He later joined Privateer's where he worked hard, and was eventually recruited by Grumbler to become an officer of Greed's Ambassadors. There he rose to the rank of fleet officer, then decided to follow Blackvixey when she started her own crew. Beginning his activity as fleet officer of Defenders of Truth, he now is a senior officer and counselor. When the flag Verus Fidelitas was created, Zamolxis was appointed lord, but then he was hunted by the Kraken, and went into hiding. He is now back, but no longer a lord of the flag, in order to keep his profile low.

Zamolxis is the proud owner of the war brig Unchanging Bullhead.