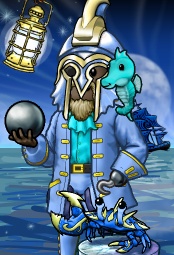 Wister is a captain and ambassador of the crew The Smelly Smugglers and a prince of the flag Black Flag on the Sage Ocean. Wister is probably best known for his Atlantis and Haunted Seas trips.

Wister started his pirate life in 2006. He was committed to getting his own ship. Once he had his first sloop he started running pillages which he enjoyed very much.

After a long break, Wister returned to his pirate life where he joined the crew The Titans as an officer under the fine leadership of Tabath. Wister was dedicated to this crew and had a lot of fun pillaging the seven seas. After being in the crew for a while Wister was promoted to senior officer. That was when Tabath started running war frigates into Atlantis. Wister was appointed to navigate these ships, and was the start of Wister’s SMH journeys.

But one time when Wister and Reeves met in the Haunted Seas environment they started shooting each other, ending up with 2 sunken war frigates and a lot of commotion. Tabath thought it would be better for Wister to leave The Titans and look for another crew.

Looking for another crew didn't take long as he was invited by Cuzz and Ohmercy to join the Privateers. Wister joined the crew as officer, and after a while he was promoted to fleet officer. Wister had a good time in Privateers and made a lot of friends in his time in the crew.

Nowadays, Wister does Atlantis Citadel runs a lot. He still enjoys his pirate life and the comfort of the Black Flag.