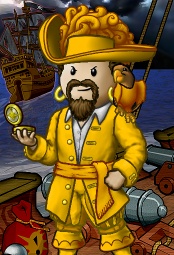 Weejonnyb is officer of the crew On the Rocks on the Emerald Ocean, formerly of the Sage Ocean.

Weejonnyb was washed ashore onto Sage around mid-August 2005. He never found the right crew until early 2006 when he joined skeletons in your closet under the command of Jackspeed. He stayed with them until the flag Go with the Flow was disbanded by Shodan.

He later joined Daggerdarla when she left skeletons in your closet to make her crew Obsidian Daggers. But when Daggerdarla disbanded Kraken's Demise he went on to become captain of his own crew. After his crew imploded in a fiery ball of doom, he joined his good friend Panteraa in the crew Ticklers.