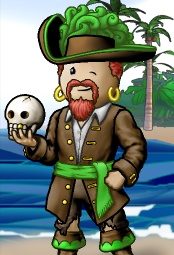 Bishopk was a fleet officer in Dead Reckoning and a member of the flag Luna Celeste on the Viridian Ocean.

As Creon, he was a fleet officer in Chaos's Destiny and a member of the flag Sea Change on the Viridian Ocean.

As Oedipus, he is an independent pirate on the Malachite Ocean.

Bishopk began playing in early 2005. He joined a crew with Killerpuppet and Godofswords before a long hiatus deleted his first pirate. Creating a second pirate, also named Bishopk, he didn't settle down with any crew for a while. He was in BrazilianOcean, Artemithian Legions, and Hawaii's Paradise before finding the flag Sea Change with the crew Skull and Dagger. After the disbanding of Skull and Dagger, Bishopk opted to stay in the flag, and joined - Poseidon's Wrath -. He stayed there happily for a year and a half. Searching for a new life of adventure, he moved to Dead Reckoning of the flag Luna Celeste. He lived on Dragon's Nest, where he kept track of a few stalls while not playing hearts. It was then when he became unhappy with life on Viridian, and moved to Malachite.

Bishopk created an alt named Creon some time during 2007. Using Creon, he infiltrated another Sea Change crew, Chaos's Destiny. Creon became good friends with his new crewmates, even though they did not know he was actually Bishopk. He frequently used the alt, even while Bishopk was with Dead Reckoning, until he moved to Malachite Ocean.

Looking for a fresh start, Bishopk moved to the Malachite Ocean and created the pirate Oedipus. Currently, Oedipus is an independent pirate.