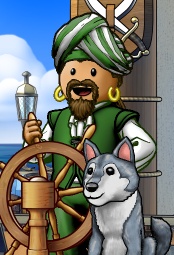 Stinger is a pirate on the Viridian Ocean. He is a senior officer of the crew The Relinquished and a lord of the flag Knights of the Undead.

He was previously captain of the crew Mercenary Legion and king of the flag Black Star.

His first crew was the Dark Revenge during the reign of Jollyjoe. Then he joined several other crews to gain more experience in the craft of captainship. After a year of active playing and gaining enough money, he left the crew Mare Nostrum and started his own crew called Mercenary Legion.

In less then a year he decided to leave the crew because he got fed up of all the responsibilities as a captain. He wandered around in search of a decent crew, and eventually joined a small crew called Destination. He sailed around the world 4 times in his only sloop, the Advanced Hammerhead, and has already memorized a great deal of all the league points. He also has also collected all charts in the ocean. These extraordinary and time-consuming tasks give him the title of navigator in almost all crew he joins.

His speciality is Swordfight and Rigging, and he only has a pirate on the Viridian Ocean.