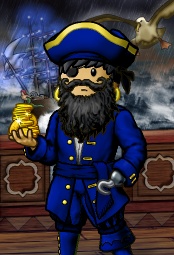 Richstall is a senior officer in the crew Thirst Trap and former prince of the flag Full Send on the Emerald Ocean.

Richstall was a pirate who has been deleted. He was a fun-lovin' pirate from Hunter who loves to pillage and take other pirate's PoE in poker.

Richstall joined the Hunter Ocean in July 2006. He first joined the crew lost allies to learn the puzzles and work his way up to officer, then to senior officer. Around October Mousa left Puzzle Pirates and Richstall left for the crew -Epic-. There he made friends with many people, including Faeviolet and Zeroblaze.