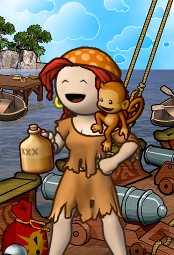 Redspitfire is a pirate on the Viridian Ocean. She has been playing the game since March 2005. She began her piratey career as the second senior officer in the crew Booty Snatchers by Captain Dreadley. Although Dreadley is still with the Booty Snatchers, he stepped down and some members left the crew.

After purchasing her first sloop, she created a crew called Chocolate. After some rethinking, she revised the crew name as Fighting Freebooters, where she maintained a matriarchy under the flag name Calico Jack until joining Imperial Coalition.

After Fighting Freebooters disbanded, she gave up her royalty status and joined Tierra Firme, with Captain Bonecaya. However, she missed her flag so she returned to Imperial Coalition and joined Polaris Borealis with Captain Cronogenesis and has remained ever since.