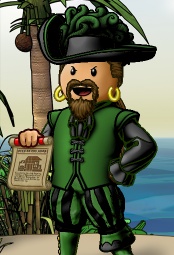 Bonecaya Started his pirate career in Culo Hunters under Captain Oneeyedjoe. He soon moved on to form his own crew, Caya Hueso Piratas. This was short lived as Bone was not ready to command his own crew.

He soon joined up with Captainjake of The Irish Heartland, eventually making it to senior officer. The original Heartland crew has mostly stuck together through their respective pirate careers. Bonecaya eventually left Heartland to yet again try to captain his own crew, Tierra Firme. He has since passed off the captain position to his close mate, Captainjake.

Tierra Firme changed flags a few times, always keeping in close touch with mates from the Heartland and Culo Hunters. Eventually it became one of the founding crews of the flag Imperial Coalition. After a time as a prince of Imperial Coalition and Governor of Tigerleaf Mountain, he left to start a flag called Serpientes Del Mar, where he now serves as the monarch. He has a pegleg.