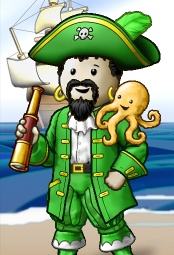 Cronogenesis is a pirate on the Viridian Ocean. He has been playing the game since June 2005. He began his piratey career as a cabin person in the crew UK Angels. There he quickly rose through the ranks to officer. However, this crew did not last and was disbanded shortly after. As a leaving gift, Cronogenesis recieved the first ship he had ever sailed on, the Small Plaice. Today this ship is still the pride of his fleet.

Cronogenesis then moved to the crew Heaven Nor Hell as a fleet officer. When the senior officer Michaelana left to start her own crew, The Erasers, Cronogenesis accompanied her originally as a fleet officer and then was promoted to senior officer. After Michaelana left due to real life reasons, Cronogenesis rallied a few of The Erasers officers and started his own crew called Pole Star. They quickly joined the flag Imperial Coalition where he still resides today.

On the 4th November 2005, Cronogenesis set up the Onyx Greeting Association, a team of unofficial greeters to help out Onyx's new greenie population. Shortly after this he was promoted to prince and given the plot of land for the weavery, The Silver Lining.

On the 19th December 2006, Cronogenesis became governor of Dendrite Island.

After his crew decided that they wanted to leave Imperial Coalition, Cronogenesis founded the flag Star of Arcady

Cronogenesis has taken part in several projects during his pirate career. These include: