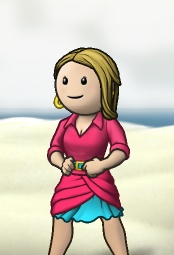 Phebee began her voyage to the Sage Ocean on January 29th, 2006 and ended up 'shacking' up in a small shack on Wensleydale.

She spent a short period of about a month swimming between crews before eventually settling down with the crew Devils Despair under the captain Devilarron. She worked her way up the ranks from cabin person to officer, and happily pillaged, making just about enough PoE to live on.

The turning point in her career as a swashbuckling pirate came when the much loved senior officer from her crew, Whitewillie, left to form his own crew, BLOODSCALE DRAGONAUTS. Phebee was subsequently asked to join the crew as a fleet officer and, as a result, left Devil's Despair. Phebee worked hard, especially at carpentry, and used her carefully saved PoE to buy a sloop named the Short Gurnard. This ship was sunk in one of the many wars that took place during the crew tumoil that proceeded. Later on, Phebee built her second sloop, the Cheerful Herring. One of her happiest moments was when she was promoted to senior officer.

As she began to earn a bit more PoE she moved to a cottage on Admiral Island. The crew's name and flag changed almost weekly (or so it seemed), and so Phebee drifted dizzily along as senior officer in the crew's many forms, not knowing whether she was coming or going. From BLOODSCALE DRAGONAUTS in the Luntic Fringe to it's own flag, BLOODSCALE REVOLUTION, to Stench of Death in the flag Recurring Nightmare, to the Dead Rabbits, to the Merchant's Guild and finally settling to the British Privateers in the flag Britsh Empire.

Phebee took a vacation whilst doing some important exams and found things to be very different upon her return. The crew was now Your Worst Nightmare and the flag had changed to Hardcore Explorers. There was a new captain and the crew consisted of over 350 members. She began to feel swamped and overwhelmed by her new surroundings. To make things even worse she was demoted to officer without explanation. This was the final straw for her and so began her search for a new crew, a new flag and a new life.

Phebee is currently enjoying living in a beautiful villa with Whitewillie on Admiral Island, and likes to play treasure drop and poker in the basement. She also enjoys a good solo pillage with three fellow swabbies, memming the routes along the way.