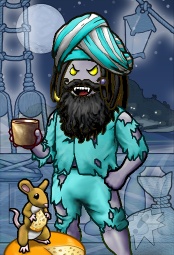 Percius is a pirate on many of Puzzle Pirates' oceans, and following the ocean merge in January, 2012, he became Percius-West on the new Cerulean, Meridian and Emerald Oceans. He formerly played as Percius on the Viridian, Malachite, Sage, Hunter, Midnight and Cobalt Oceans. He also played on the Crimson Ocean during the time that this server was available. Although he is reasonably new to Puzzle Pirates, he is planning on sticking around for many years to come. With his best friend, hearty, and in-game wife, Adrielle by his side, Percius feels that he can accomplish anything.

Percius first started playing Puzzle Pirates after being introduced to the game by Adrielle. He began on the doubloon oceans, but quickly made a character on all oceans, to be like Adrielle. He liked the fact that he could log on anywhere, and explore all the different oceans that puzzle pirates has to offer.

Percius likes to wear turbans, as he finds them very sexy. He feels that he looks quite dashing when wearing a turban, and hopes to soon be able to afford a turban on every ocean. Percius also likes to pillage, and wants to try sea monster hunting oneday soon.

At the moment, Percius is enjoying life as a newlywed pirate, with his new wife, Adrielle. He hopes to have many happy years with her upon the seas.

Percius on the Ice Ocean is a pirate of the crew The Children of Hurin. He joined this crew on his first day of playing on the Ice Ocean, when he met Rohir. Percius would oneday like to be an officer of his crew, and to own a ship. Percius has a black rat, named Ratatat Tat, and he likes to dress in tan.

Percius on the Viridian Ocean was recently promoted to the rank of pirate in his crew, Hell Avengers. He has a beige rat named Golden Syrup, and likes to wear aqua coloured clothing.

Percius on the Sage Ocean likes to dress in white, to match his white rat, Snowflake.

Percius has recently joined a crew as cabin person, and has also recently purchased a very attractive mint and lavender outfit. He plans to raise his stats so that he can be promoted to pirate in his crew.