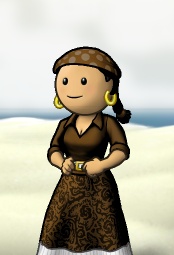 Opsat is a pirate who sails all oceans but considers Sage Ocean as her home.

Opsat ventured into Sage Ocean in 2007. A captain named Potgould found her on the docks and took her under his wing, welcoming her into his crew. She was quickly promoted to senior officer of No Chance. Shortly after, Potgould announced his wish to leave the ocean and offered to hand over his crew to Opsat. Feeling herself to still be too much of a greenie to manage a crew, she declined, and accepted, instead, her old captain's parting gift of two ships - a dhow and a war frigate.

Finding herself independent once again, Opsat decided to seek out the crew Impending Insanity (of the flag Good Grief), which she once (or twice, maybe) jobbed with, and whose public statements amused her to no end. One day, she finally spied them again in the open seas and applied for a job. After the pillage, she asked the officer on board, Wendyrz, if she could join the crew. After a few minutes of consultation, Opsat was welcomed aboard.

Over the next two and a half years, Opsat rose through the ranks. She participated in the flag's blockades usually in the role of jobbing contact, or sometimes as XO or VA. It was also during this time that Opsat began to appear in all the other oceans (Hunter, Malachite, Midnight, Cobalt, Viridian, Crimson, Opal, and Jade), often to help out crewbies and flaggies in their blockades there.

During the peak of Opsat's piratey life, she created several alternate pirates for particular purposes including: (1) to collect different colored rats (Opsat is very fond of collecting stuff), and (2) to serve as blockade alts.

But most remarkable of all, is Opsat's oldest and true alt:

Nearly a year after the winds brought her to Sage Ocean, and long after her old captain offered her his crew, Opsat felt she was finally ready to start her own. But bless her loyal heart, Opsat could not find it in herself to leave her beloved crew Impending Insanity to venture out on her own. So she gave the captain's hat to her first alt Elrod, and the crew Drunken Madness was born.

But then, with Opsat being mostly preoccupied with insane activities, Elrod's crew remained largely a one-woman crew, occasionally setting out only to mem Sage Ocean bit by bit. Until, about half a year later, Elrod was approached by a former crewmate from No Chance, Teague, who invited her to join his flag, Legion of Drunks.

Flag activity was erratic at best, briefly gaining a semblance of direction when Elrod welcomed Imamuppet and his crew Red Hot Chilli Pirates into the flag and gave him the reins. Elrod is now uncertain as to what happened to the flag since then, whether it was retaken by Teague or Imamuppet and bestowed to the current holders of the flag.

As for Elrod and her once again independent crew, she remains in the now-merged Sage and Hunter Oceans, and hopes to one day complete memming the greater Emerald Ocean.

As of 2014, all of Opsat's alt accounts have been claimed by Davy Jones' Locker, along with all their colorful rats, rags, and sticks. Only Opsat (in all oceans) and Elrod remain.

In January 2015, she finally heeded the advice of friends and doubscribed Opsat to secure her place in the oceans. Maildrop has also been pulled from the depths to resume her role as messenger.

In February 2015, Opsat finally set foot on Ice. There was no one there...