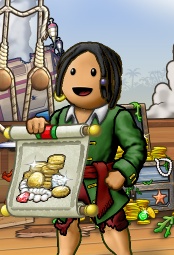 Neoomni is an officer in the crew When The Levee Breaks and a member of the flag Barely Dressed on the Meridian Ocean, formerly the Viridian Ocean.

Neoomni, referred to as Neo by most, Omni by others who know him outside of Puzzle Pirates or who known his original preference, started playing on the Viridian Ocean in early April of 2006. As a greenie he had paid no attention to the original crews he was a part of.

The first meaningful crew he belonged to was SCURVY. In there he rose to the rank of senior officer and remained there until June. At this time The Order of Fortune was founded. He moved out and created The Falcons of Zion in an attempt to help entice more crews to join the flag. The crew was founded with a great friend of his, Pluffy.

Come August of 2006, the flag was bustling with crews and as such he felt it time to go back and merged with SCURVY. In early November of 2006 he felt sheltered and had the need to see what the ocean still had to offer.

He left and joined Reality. Rudebwoi welcomed him as a fleet officer where he began to become a ranked Battle Navigator. In mid-January 2007, Neoomni left again to create his own crew and thus Neozion was born. However shortly after that Neo was still fueled by the desire to become #1 Battle Navigator for at least one day. He disbanded the crew and moved to Infestus to attempt higher ended elite pillages.

Something felt empty though and he left to start his own crew on March 1st, 2007. He created The Order of Zion with his great friend to this day, Dyrbar. Not too long later his dream to be a #1 Battle Navigator came true for 2 days. On June 6th, 2007, he created the flag The Illuminati in an attempt to expand his crew structure. Him and Dyrbar and the crew experienced a great time in what can be considered to Neoomni as a golden age for himself.

On July 27th, 2007 he disbanded his crew and flag due to a few issues and quirks. The next day he joined Redbrdterry in the crew Mermaid's Typhoon. On August 17th, 2007 he was promoted to prince of his flag, La Poste de Falcone.

On November 27th though, he would find himself solo after leaving Mermaid's Typhoon and La Poste de Falcone. Later he would join - Poseidon's Wrath - (PW) who is in the flag Sea Change (SC) as a fleet officer.

On January 1st he left PW to create his own crew yet again. Wanting a lil' seclusion and space, he founded the crew Free and Accepted Masons (F&AM) named after the famous and greatest Order and Fraternity of the World - which he is a member of. He could not forget the great pirates of SC though, and would take F&AM into the flag. However things would not go as planned and he would disband the crew.

In the month of February 2008, he had joined Mare Magnus as a fleet officer. That was shortly lived as he would later join Still Of The Night as an officer.

Over his career, many pirates would come and go but a few stuck out and guided him towards the pirate he is today. The list below is a contribution to the few most noteworthy pirates.