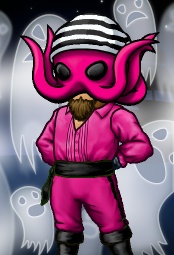 Nardiello was the first mate and a senior officer in the crew Super Sea Monkeys, and a royal in the flag Bad Blood. He was permanently banned from Puzzle Pirates in December 2012.

In mid-February, the owner of Blowbub rediscovered Puzzle Pirates, this time as the pirate Nardiello only two weeks after the merging of the Sage and Hunter Oceans into the Emerald Ocean. That same day he joined The Enlightens under the flag Enlighten Knights, during a pillage run by fleet-officer-at-the-time Htcwildfires.

However, after seeing that pillaging was not a regular thing within that crew, he swiftly went job searching at the inn on Admiral Island, and was offered a job as a pirate in the newly founded crew, Tales From The Dead under the flag Enemies. He quickly made friends with the captain - Captainbap - and two real-life brother senior officers - Chewit and Vimtoo. After only a week of participating in regular pillages and event blockades he was promoted to Officer after making donations amounting to almost 25,000 Pieces of Eight to the captain and senior officers of the crew.

This did not last, as only four days later, the captain fell out with Chewit and Vimtoo over the unfair demotion of another pirate, and the two senior officers left to create a new crew together, which Nardiello and one of the fleet officers of Tales from the Dead moved to the next day. The new crew was called Wings of Redemption and the day after, it joined the flag Jigsaw Tessellators under the reign of Sedna. In the early days of March 2012, the account Blowbub was, for the third time, hacked with combined assets from both accounts totaling 150,000 Pieces of Eight being removed from the account. Fortunately, the hacker this time did not manage to change the password before the owner did it himself. The next day, a fleet officer and Tales From The Dead ex-crewbie Mrhardworker was also hacked losing three ships and a sum of money.

Nardiello received a mere 40,000 Pieces of Eight in compensation from the Oceanmasters with which he bought and stocked his first ship on this pirate - the sloop Committed Haddock.

In mid-April Blowbub opened his third ever stall - under Nardiello - a distilling stall on Aimuari Island in the Orion Archipelago, which earned him the title of distiller in his crew. In early-May, Nardiello took on the position of greeter in his ocean. Later that month, he managed to reach ultimate standing in the Blacksmithing puzzle, and, for this, he assumed the title of blacksmith in his crew.

In late May, Tales from the Dead left its own flag, Enemies, to join the flag, Bad Blood, while they rebuilt numbers and ranking. With this flag change, Nardiello received the flag position of titled member, along with the captain and first mate. In this flag, Nardiello began to build his fleet including June's limited edition Casino class sloop, and a war frigate.

In July 2012, Nardiello assumed the title of first mate in Tales from the Dead - as shown by the new crew portrait. He was, then, stripped of his greeter title after posting inappropriate material to the game.

On 10th August, Nardiello, along with one of his closest hearties, Ledgers, started his own crew, named the French Toast Mafia. He joined his previous flag Bad Blood and, by 18th August, with the crew increasing in numbers and fame, Nardiello became a prince in his flag. On the 8th September, however, after experiencing mild financial problems and a slight debt crisis, Nardiello was forced to merge his crew - French Toast Mafia - with the crew 'Till The End, which was renamed to Super Sea Monkeys after this. Here, he joined forces with another close friend, Biob, to make the joint-crew better.

On 17th October, the main account holding Nardiello was hacked by an unknown source. They relieved him of money, a selection of expensive black new swords, painted and renamed ships, pets including his beloved pet Wispa and a selection of rare furniture from haunted seas and gold boxes.

On 5th November, the pirate Nardiello was accused of 'Using bots and/or other third party applications' and the account Blowbub was banned. However, 7 days later this account was put on probation due to an honest and accepted appeal. One month later, on the 7th December, after reconsideration, Nardiello's ban was re-instated, thus ending his career in the piracy world.

Nardiello was a side-pirate in the Meridian Ocean, who was a fleet officer of the crew Cohortu Honorati, captained by Dscpd.