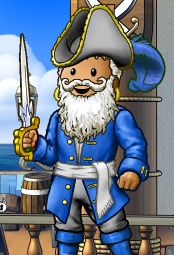 Dreadful, now retired is the former captain of the crew Black Dawn, and monarch of Moonlighting.

Black Dawn until October 2006, was the monarch crew of the flag Moonlighting. Upon retirement, Black Dawn merged into Phoenix Fury and the crown passed back to Mordrid.

Made With Love - Furnisher - Namath Island

Dreadful is the father of an ex-monarch of Moonlighting and now Governor of Namath Island, Mordrid, and husband of a former royal of Moonlighting and senior officer of Black Dawn, Lyonessa, as well as being the self-proclaimed "Old Fart" of the flag.

If ever you see him wandering around the archipelagoes or floating about in the Midnight Ocean, be sure to say hello and give a little wave, as he is always open for a chat.