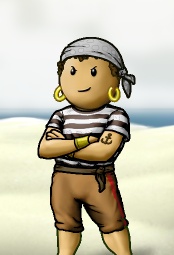 Mattiebo is a pirate on the Emerald Ocean, originally created on the Sage Ocean.

Mattiebo has been playing Puzzle Pirates for around 4 years and has appeared under numerous names. He has had 2 accounts named Mattiebo in those 4 years, but his current account is here to stay.

He started out in Queen Anne's Revenge but moved onto several different crews including Motley Crue, Sage Superstars and What Lies Beneath before finding a place in Rising Storm.

He has owned both a tailoring and shipbuilding stall, both of which no longer exist after he quit last year. He returned to find a pirate with nothing apart from puzzle standings and an outfit and is now working hard to get more money from Atlantis, the Haunted Seas and merchanting.

You can mostly find Mattiebo in the Admiral inn or on a pillage (most likely a sea monster hunt). He will soon be starting his own crew and is currently working for money to fund it while he thinks of names.