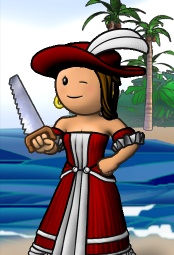 Materials, is the captain of Twilight's Sabre, and a princess of the flag Impavidus Formido. She was also the governor Conglin Island on the Cobalt Ocean in mid-2006.

Materials' was washed onto the shores of the Cobalt Ocean in the early days of June 2005. She joinned the crew Twilight's Sabre and quickly worked up the ranks to senior officer. Since then, she has been actively training new officers, also been helping in maintaining the well-being of the crew as part of the oligarchic nature of the crew's politics. In October 2005, she was appointed First Mate. In Febrary 2007, the governing body voted her on to be the new captain of the crew when the former captain was unavailable for duty due to real life issues.

With the aid of many flag mates, Materials learnt the art of successful merchanting. Currently, she owns Feathers and Fur Inc - a tailoring shoppe on Tigerleaf Mountain, as well as a tailoring, weaving and apothecary stalls on Dragon's Nest; also she helps to manage a tailoring and weaving stall on Kirin Island.

In August 2005, Materials was appointed princess of the flag Impavidus Formido. Since then, she has been active role in developing and maintaining the strength of the flag's alliances. Materials has also been active in the blockade front, successfully leading the defence of Conglin Island on 3 accounts namely, Conglin II, Conglin III and Conglin IV. She organised her flag's attack at Spectre II. She has also blockade navigation experience from Terra V and Spectre II, and being an executive officer at Terra I, Terra II, Viridis II, Viridis IV, Cochineal I and Vernal I, Carmine I, .

In late 2005, Materials picked up the art of Swordfighting from Bot and Godhand. Later in mid 2006, she led the team of The Mofo's, consiting of Bot, Arcadeus, Fiskylate, Fastflash and Fishknife in OCL Season 6, Cobalt Swordfighting where her team came in an overall 5th.

On 3rd March 2006, Teralyna married Materials on the shores of Mermaid's Purse, where more than 80 guests attended the wedding.

Materials' pillages are known for them being often extending to the wee hours of the morning, greenie-friendly yet attaining considerable booty hauls. Her pillages welcome polite and well-behaved pillagers irregardless of experience and skill in puzzling.

Also, she enjoys perfecting her fine Carpentry skills while pillaging with her many friends on the ocean. In mid December 2006, she was ranked #1 ocean-wide in Carpentry. Her current longest chain of masterpieces is MP^18.

She is also often seen on the Midnight Ocean mingling around with her long-time crewmates of White Rose, Moonlighting; or also on the Hunter Ocean earning doubloons.